Rescue, cleanup continue in flood-ravaged village of Schuld in Germany 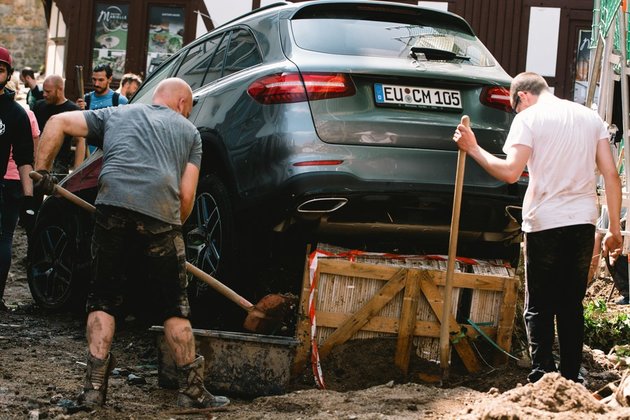 AHRWEILER, Germany, July 20 (Xinhua) -- In the village of Schuld in western Germany, the heavy flooding over the past few days has left behind a trail of devastation.

"The situation is as you can see it now," says the owner of one of the town's taverns, declining a request for an interview while continuing the cleanup work. "I really have too much to do."

The heavy rainfall all across west-central Europe had triggered a rare flash flood emergency. By Tuesday, the floods have killed at least 117 people in Rhineland-Palatinate and a further 47 in North Rhine-Westphalia.

Hundreds have been injured in the disaster and several people are still missing. The local authorities expect the death toll to rise further as the cleanup and rescue efforts continue.

Schuld in Rhineland-Palatinate state's Ahrweiler county, which is adjacent to North Rhine-Westphalia, is one of the areas hit hardest.

The entry points to Schuld were blocked by large excavators, transport trucks and fire engines, making the town accessible on foot only.

The banks of the Ahr river were littered with fallen trees and piles of debris left by the flood. The road along the river was open on Tuesday but was still covered in air-dried mud, and every time a rescue vehicle drove past, dust instantly rose.

Some of the homes and shops along the river have been washed away, while the ones that withstood the masses of water were in complete disarray as if they had been looted.

The floods cut the town's electricity, drinking water supply and even communication. The cell phones said "no signal."

Ronas, an 11-year-old local boy, recalled that "I remember last Wednesday at 3 p.m. when the water started coming into our basement. By 6 p.m., the whole street in town was inundated." He and his family had no chance to leave -- so they stayed. "I thought at one point that all hope was lost," he said.

Fortunately, Ronas and his family were finally picked up by a rescue team at 5 a.m. the next morning.

Apart from baling the extreme weather, several experts have since criticized what they called the "monumental failure" of the German disaster warning system, urging its review.

Michael Theurer, deputy chairman of the German Free Democratic Party's (FDP) parliamentary group, said the death toll revealed a "systemic failure" as both the government and the media have failed to adequately communicate the timely warnings of the meteorological service to the public.

Karl Lauterbach, an epidemiologist and politician of Germany's Social Democratic Party (SPD), told local media that the country was "just as badly prepared" for disaster control as "for pandemic protection." He called for lessons to be learned from the disaster and for the construction and expansion of disaster mitigation infrastructure with civil protection at its core.

Amidst the rubble in Schuld, rescue efforts continued on Tuesday in an intense and orderly manner. Countless vehicles and personnel from the German army, the local fire and police departments, the Red Cross and different specialist relief agencies were helping the locals' massive cleanup effort.

On Sunday, Merkel said that the German government would adopt a "rapid" financial aid package on Wednesday to the affected areas, adding that the federal and state governments would work together to help restore order there.

"We will work together and hope that everything will be back to the way it was as soon as possible. Although this may take months, years -- or even longer," commented a volunteer rescuer.