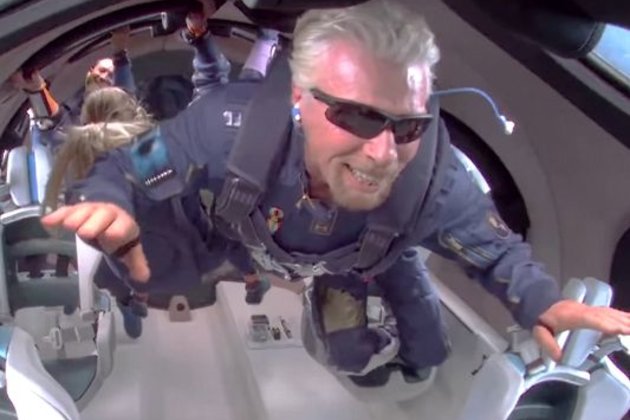 Our economic and social system has bred people wealthy enough to squander the privilege of space travel for a not-so-cheap thrill, writes Professor John Quiggin.

IN APRIL 1961, the world learned in amazement that Soviet cosmonaut Yuri Gagarin had become the first human being to orbit the Earth, spending 108 minutes in space before returning. The result was a race between the Soviet Union and the United States to demonstrate technological superiority, culminating in the Apollo 11 moon landing in 1969.

Just over 60 years later and with rather different feelings, we are being treated to the spectacle of a race between three billionaires, each claiming to be the one who will inaugurate a new era of space travel. But far from demonstrating massive advances, these efforts represent a near-complete retreat from the ambitions of the mid-20th Century.

The first of these adventurers, Richard Branson, made it just to the edge of Earth's atmosphere, spending only a few minutes in zero gravity. In place of taking humankind to the stars, Branson plans to offer joyrides to a handful of people willing and able to fork out $US250,000 (AU$339,551) for the privilege.

This spectacle is not, as its boosters have rushed to claim, the dawn of a new era. But it has a lot to tell us about humanity, space and billionaires.

Billionaires spend buckets on beating each other in space race

Billionaires have been battling it out, spending dollars and carbon at a huge rate in a bid to win the ultimate race to space.

The most immediate lesson is that with marginal exceptions symbolised by the billionaire joyrides, humans will never leave Earth. No one has ever gone far enough into space to lose sight of our home and in all probability, no one ever will. The U.S. is still planning a new mission to the moon and China has aspirations in the same direction. But even if these efforts come to pass, they will be nothing more than a symbolic reprise of last centuries Cold War rivalry. The prospect of travel to Mars is even more distant and unlikely.

Sixty years of spectacular technological progress have allowed us to explore both the Solar System and outer space in amazing detail, using telescopes, uncrewed spaceships and robotic rovers. We know far more than we did in the mid-20th Century, when it was still possible to believe, for example, that Venus was habitable. In the 1960s, we could expect that humans might discover new marvels in space. But now we have found marvels far beyond the conceivable reach of human travellers.

Nothing has changed in the basic physics that makes space travel, beyond the minimal scale achieved in the 1960s, essentially impossible. On the contrary, advances in physics have shut off every theoretical loophole that might have permitted us to exceed the limit imposed by the speed of light. Nor has there been any reduction in the massive amount of energy needed to propel even a single person into space.

Moreover, everything we have learned about our own biology has emphasised the lesson that we evolved to live here on Earth and nowhere else. Six-month missions to the Space Station produce a loss of bone density that takes three to four years to repair itself. On average, crew members lost as much bone mass in one month in orbit as an elderly woman loses in an entire year. Life in space, were we to attempt it on a serious scale, would be, in Thomas Hobbes' words, 'nasty, poor, brutish and short'.

The race for global broadband satellite internet is on

Of course, none of this will matter to joyriders spending a few minutes in space and paying a small fortune for the privilege. But for the rest of us, it raises questions about an economic and social system that allows a handful of ultra-wealthy individuals to play such a big role in determining our collective priorities.

Not all billionaires are as frivolous as the space adventurers. For example, whatever his personal faults and despite consistently favouring neoliberal policy solutions, Bill Gates has given a lot of support to efforts to eradicate disease in poor countries. But for every Bill Gates, there are a string of plutocrats funding and promoting the most poisonous forms of Trumpism and pro-rich class warfare.

The world is facing challenges that threaten our very existence, from pandemics to climate catastrophe to nuclear war. We can't rely on fantasies of escaping into outer space. Nor we can afford a system that delivers a huge proportion of our collective income to a handful of irresponsible adventurers.

John Quiggin is Professor of Economics at the University of Queensland. His new book, The Economic Consequences of the Pandemic, will be published by Yale University Press in late 2021.