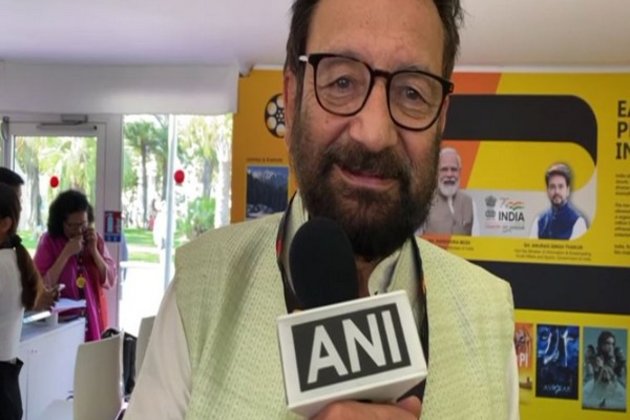 Cannes [France], May 18 (ANI): Filmmaker Shekhar Kapur who is attending the 75th Cannes Film Festival where India has been named the 'Country of Honour' at the Marche du Film, has stated that in the next few years, the country will "become the biggest and the largest media entertainment platform in the world."Shekhar, who on Tuesday walked the Cannes 2022 Red Carpet as part of the Indian delegation led by Information and Broadcasting Minister Anurag Thakur, while speaking to ANI expressed his support for India by saying, "The reason I am here is to support the Minister and the idea that India, in the next few years, is about to become the biggest and the largest media entertainment platform in the world. We are celebrating the future and not just the past.""This is not just a celebration of cinema, it is the celebration of youth, it's the celebration of the way India has digitalised, it's the way that broadband is available to everybody and it's the way the Indian youth and content makers along with the number of technology people that we have, we are all set to go and conquer the world. That's why we are celebrating the future," the filmmaker added.

Earlier, ahead of the Indian delegation's presence at Cannes 2022 Red Carpet, Prime Minister Narendra Modi penned a message expressing his immense pride by stating India possesses the potential to become the content hub of the world.

He had also noted that India's participation comes at the momentous meeting of celebration of 75 years of India's independence, the 75th anniversary of the Cannes Film Festival and 75 years of diplomatic relations between India and France.

The India Pavilion will be inaugurated by Union Minister Anurag Singh Thakur on Wednesday at Cannes and the universal theme for this year is India the content hub of the world. (ANI)